Characterization of a new tracer for imaging of adrenocortical disease

11C-Metomidate (11C-MTO) was developed as a PET radiotracer for adrenocortical tumours and has also been suggested for imaging in primary aldosteronism (PA). However, the use of 11C-MTO is somewhat hampered by considerable accumulation in the liver, which, because of its close proximity to the right adrenal gland, may obscure adrenal pathology and make PET measurements unreliable. Moreover, increased 11C-MTO uptake has been found in various liver lesions, such as adenoma, hepatocellular cancer and focal nodular hyperplasia, with the risk of false positive imaging results. Another disadventage of the tracer is that the clinical availability is restricted because of the short half-life of carbon-11 (T1/2= 20.4 min), which limits its use to PET centres with an in-house cyclotron and radiopharmacy.

The aim of this study was to evaluate the binding properties and in vivo behaviour of the previously published 18F-labeled (halflife 109.5min) etomidate analogue, para-chloro-2-18F-fluoroethyl etomidate; (18F-CETO), as an adrenal PET tracer. Comparative studies were also performed with 11C-MTO and with 18F-FETO, another adrenocortical imaging agent, which has not reached widespread clinical use, partial due to its two-stage radiosynthesis.

Following in vitro binding kinetic analysis and the evaluation of ex vivo biodistribution, in vivo imaging studies revealed high specificity of 18F-CETO accumulation in the adrenal cortex qualitatively surpassing those of 11C-MTO. Non-specific binding to the liver was significantly lower than that of 11C-MTO. 18F-CETO is a promising new PET tracer for imaging of adrenocortical disease and should be evaluated further in humans.

18F-CETO imaging in rats and mice:

Eight female C57BL/6 mice and two male Sprague Dawley rats were were injected with of 18F-CETO (1.6±1MBq or 4-5MBq, respectively) and the 1h long dynamic PET imaging was started immediately. Four of the mice and one of the rats were co-injected with metomidate (1μmol/kg). The PET examination was followed by an MRI acquisition. 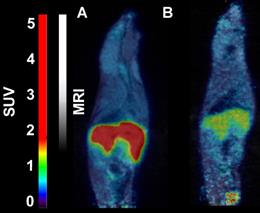 Rats were were iv. injected with 4.0-4.8 MBq of 18F-FETO, one of the rats was given metomidate (1μmol/kg) and 1h long PET scan was started immediately.

High end MRI with the most robust cryogen-free superconducting magnet on the mar...

How can we help you?

Please contact us for technical information, products and services.